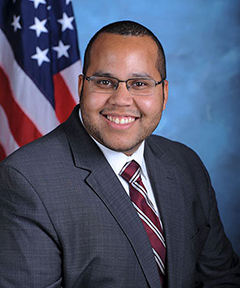 I never planned to run for office. I cut my teeth as an intern with U.S. Senator Chuck Schumer (D-NY) and worked my way up to senior staff within a year. It was not easy, but I enjoyed the people that I had the chance to work with during my time with the Senator. I was happy being the person behind the scenes and helping others get elected or advising them on strategy.

I am a fiercely private person and an introvert by nature. In April of 2013, my then boss, State Senator Gustavo Rivera (D-Bronx), got a call from my predecessor, Assembly member Nelson Castro, letting him know that he was stepping down immediately.

The details were murky in those first few days, but suffice it to say there was going to be a special election taking place that September. I was left with two options; run for office and try to restore some level of trust and continuity in this seat, or leave it to chance. I couldn’t bring myself to allow the latter to happen. I had to run.

That first election was incredibly difficult. Being relatively young at 28 years old, people questioned whether I had the life experience to take on such a daunting task. I tried to answer that doubt through my actions as a candidate by meeting people where they lived and worked. I worked hard to show the voters that I was a part of this community. I knew the everyday struggles of living in the Bronx. I showed them that I wasn’t someone who cared about titles, trappings of “power,” or someone who wore a suit to work every day. I was and always will be about the work. I was a kid who wanted to do something for the people who gave so much to me.

In September 2013, I won that first election and it was a quick turnaround. I jumped headfirst into all the responsibilities that came into legislating and community relations. I read all that I could read regarding committees, internal processes within the legislature. Early morning days to late meetings at night, none of it bothered me.

I was dedicated to helping my neighbors and being their Assembly member. I was there to answer the phones, help constituents with cases and lead a small but dedicated staff. I was hungry and happy to help.

As a member of the New York State Assembly, I was in a unique position to see the many struggles of Bronx families with the pandemic and meeting basic needs as food, clothing, shelter and general disinformation regarding the virus. I personally did what I could and it was tough.

I spoke with many of my constituents and listened to them recount how grandmothers and older relatives living in their homes would get sick and pass away, or about the semi-permanent state of terrible housing conditions in their buildings. It was heartbreaking.

Day in and day out so much pain, death and suffering from people that I had the chance to meet in their homes, talk with them at community board meetings and events. Not seeing them anymore was taking a mental toll.

As an Assembly member, I fought to make sure that hospitals, like St Barnabas Health System, had the resources they deserve especially after COVID. I am proud of my record of standing up for the safety net hospitals that serve my constituents. I still had the drive to help but wanted more flexibility than being an elected official allowed. Fortunately for me, I had a conversation with Dr. David Perlstein, President and CEO of SBH, that piqued my interest. Dr. Perlstein asked me if I wanted to join the team at SBH and help with the mission of health and service.

After several conversations with my family and knowing SBH’s commitment to the community, I gladly accepted. Working at SBH has been incredibly fulfilling professionally and personally. It allowed me to continue my career in public service and spend more time with my girls.

On September 14, 2020, my wife and I welcomed our second daughter, Gisselle, into this world. My wife, Glendalys, suffered complications during her pregnancy which were exacerbated due to the pandemic. It took a toll on all of us. It also forced me to focus on what to prioritize personally and professionally.

In the end, I was faced with a hard choice: focus on my work as a legislator or focus on my growing family. The choice was difficult, but I decided that it was better to leave now. Stepping down immediately allowed me the space to refocus, which I desperately needed. It also gave another person the opportunity to serve my community. I still had the drive to help, but I did not want be in a position where my constituents suffered due to lack of attention.

I have always understood the weight of public service. It is a sacrifice if you take the process and take advantage of the apathy that exists within the electorate. I could have certainly won the next few elections and stayed in office with little difficulty. I knew my limits and understood my role. Being a dedicated representative focused on the work is more important than the personal aggrandizement.

Looking back, I am proud to say that I served in the Peoples’ House. In eight years, I served with dozens of smart and extremely dedicated individuals. It was an honor to see my friend and former Bronx colleague, Carl Heastie, ascend to the Speaker’s Rostrum. I am proud of the work that helped countless New Yorkers across this state that I will never meet.

Regardless of my professional accomplishments, I am most proud that I can come home to my wonderful wife and my two precious daughters every night. I know that I will always be loved by them regardless of the circumstances. To me, that is what matters the most and I know I made the right choice for them and for my community.